Over the last week, I’ve been far more faithful than I have in awhile to work on my book. As anyone who has been reading this for longer than a few months knows, I’ve been [painfully] trying to edit my sappy romance novel (it’s technically named God’s Masterpiece – but I don’t think I like it. It doesn’t work. I’ve rarely had so much trouble with a title before).

I really do think this revision will make it better – and by re-writing that one scene by hand and then transcribing it BACK to the word document, I’ve rewritten it like three times – but even now as I am typing it back in (and consequently editing it again), I keep thinking it isn’t right. But then, isn’t that what all writers think? It will never be ready?

You know, I am probably the person that is actually true for, unlike others. 😛

But, as I mentioned very, very briefly in a recent tweet – here’s my current issue: So, Josie is supposed to be quiet and shy and pretty awkward until someone gets to know her (yes, basically exactly like me). But at the same time, she is more confident when she is on her own turf (a.k.a., her home) – and i know this is accurate, because it is exactly how I am. But when trying to translate that to a book, I feel like it comes out, 1. like she is inconsistent character-wise and 2. Like she is annoyingly awkward and can’t stop blushing, which no one likes to read about.

So, that is what I’m trying to work through right now. How to make a heroine that is awkward, without being annoying and still at least a little endearing, shy and uncomfortable, but able to hold her own especially on her own turf, caring, but still gets impatient with her very sick mother (who, by the way is a conundrum herself, since she has cancer, is weak and sick, yet never stops talking and nags part of the time and is loving the other part of the time).

Characters. They drive me up a wall sometimes. Kind of like real people. In which case, maybe it’s okay?

And – that’s my ramble for today. 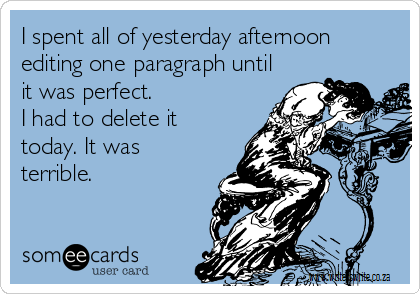