I almost sat down to write last week, but to tell the truth, I was so upset over New York’s recent legislation allowing abortions up to birth that I couldn’t. I debated for awhile about writing a long article talking about abortion – but I don’t know. I feel like there are already so many articles out there and those that are pro-life read them and those that are pro-choice don’t, no matter who writes them. So, I will mention only one thing that stuck out to me. One girl responded to a post about it on Facebook and said something along the lines of, “I go back and forth on the abortion thing, but this is just horrible!” And I couldn’t help but blink and shake my head. Because – I want to ask – actually the same thing I want to ask so many people – at what point do you deem the “magic moment”? At what point does that baby suddenly become a baby instead of just a fetus? Why do you think it might be okay to do abortion earlier, but later is no good because THEN and ONLY THEN it is a baby? Do you seriously believe that one millisecond it is a fetus and then suddenly a millisecond later it becomes a baby to be protected? That’s absurd. No, life begins at conception. There is no magic moment. Abortion is killing children just the same earlier as it is later – it is only more clear later that it is a child being torn to pieces. No one can ever convince me that the picture below is not of a child, killed because it was inconvenient. 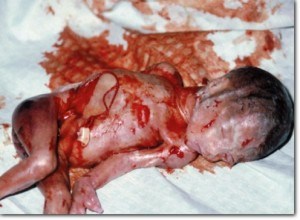